The Scooter is a 1963 Lambretta TV200 that I bought in 1969 for £25 when I was too young to ride it. My Dad never wanted me to have a scooter so I had to take it home in bits and hide it in the shed! It needed plenty of TLC and some work doing to the engine. I painted it white with blue flashes on the side panels and horncasting. Then when I was finally 16 years old I was able to ride it on the road.

Fashions changed quite a lot during the Seventies and sadly the scooter boom seemed to end. But I used my scooter for work and getting around. So from a Skinhead to a Smoothie, Soul Boy then a Punk in 1976 so from God Save the Queen I felt another transformation coming on. 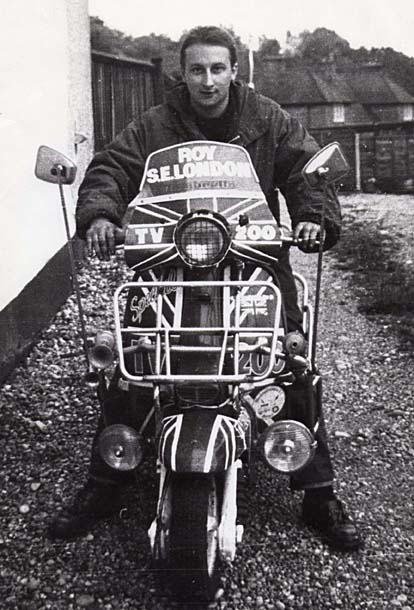 In 1977 I decided to repaint my scooter. This time I lovingly repainted it by hand in red, white and blue union jack flag colours for the Queen’s Silver Jubilee Celebrations. I knew some old bloke who was a retired upholsterer and I got him to hand stich a union jack flag seat cover for me as well. Once all the paintwork was finally completed I decided that I would Mod it all up as much as I could with a fly screen, mirrors, crash bars, spot lights and also with a long fibreglass ariel with loads of flags on.

The scooter was a huge success in 1977 and got loads of attention. Unfortunately, I got some unwelcome attention from the Police who stopped me and fined me for the mirrors sticking out too far and my ‘dangerous’ ariel that could have someone’s eye out!!

The scooters real claim to fame came the following year in 1978 when it was chosen by The Who Films to appear in the filming of Quadrophenia. Originally the scooter was earmarked for one of the main cast to ride but in the end I was so lucky that I got the chance to ride it myself.

The Film Company hired my scooter separately for the full three and a half months filming and they took great care of it – probably more than I did at the time. I still remember the day the Film Company sent a removals lorry to collect it for the filming. It was unbelievable; they couldn’t have been any more graceful if they tried. They more or less wrapped it up in cotton wool. I remember being really sad when they drove off, but the next time I saw my scooter it was with the film crew on location in Brighton. The scooter was gleaming they had polished all the chrome and even managed to get the spotlights working as well.